The Rabbi's Cat 2: Interesting Themes Wrapped in a Graphic Novel


Why would I read The Rabbi’s Cat Volume 2 before reading the first book?  I guess it’s because it was called to my attention by Maggie Anton on Goodreads.    Some would wonder why they should read them at all.  After all, these are graphic novels which look like comic books.  They are therefore convinced that graphic novels are only for children.  Well, they are mistaken about that.  I have read other graphic novels.  The last one I read with a Jewish slant was Magneto: Testament which dealt with the X-Men character Magneto as a Jewish Holocaust survivor.  It was really powerful, and I recommend it. 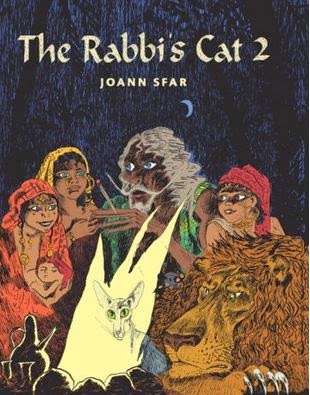 Communication is a central theme of this novel.  There is a Russian character who isn’t understood by the other humans when he first arrives, yet the Russian and the Rabbi’s cat had no problem communicating.  It’s pointed out in this book that the ability to communicate is predicated on the ability to listen.  This may seem obvious, but failure to listen is a common problem in all types of communications.  This means that even when there is no language barrier, humans are incapable of understanding each other when they aren’t listening.  A translator is found for the Russian, but he still isn’t always understood.

Since the Russian is an artist, this book also deals with the orientation of Judaism and Islam toward art.  So the question arises as to whether art is idolatry, and if so under what circumstances.  The Russian artist also has an interesting response on the subject.  He tells us that each art work is a prayer addressed to God. I have always been interested in the dilemma of Jewish artists, and interpretation of the second commandment which forbids graven images.  My Name Is Asher Lev , Chaim Potok’s provocative novel about an artist in the community who now call themselves Haredi (those who fear God), is one of my favorite books.

There is a male character named Malka in this novel who has a lion companion.  Anyone who knows Hebrew would be forgiven for thinking that Malka must be female since “malka” means queen in Hebrew.  We are given a story about Malka disobeying authority for religious reasons.  I was reminded of the best known story about the prophet Daniel.  Lions figure in that story, but in a very different role.   In folklore lions are usually threats, not companion animals like domestic cats.  Sfar seems to be questioning why we view one type of animal positively while we consider a relative of that animal as a threat.  Consider the differences between how dogs and wolves are viewed.

This is definitely the most interesting graphic novel that I have read in 2014.  I promise to read The Rabbi’s Cat Volume 1 eventually.

The following post originally appeared on Book Babe, which is the blog where I was recruited for a blog tour to promote Enchantress by Maggie Anton.  It contains a review and an interview with the author.


I was fascinated by Rav Hisda's Daughter: Apprentice because it showed us a Jewish world that is so radically different than the one that I was accustomed to seeing.  See my review on my former blog that was titled But Is It Really Jewish Magic?  That first Rav Hisda's Daughter novel caused me to realize that a revolution happened in Judaism in the fourth century C.E.  I couldn't wait to read and review the sequel and was delighted to have the opportunity to be part of the blog tour for the release of Rav Hisda's Daughter: Enchantress. 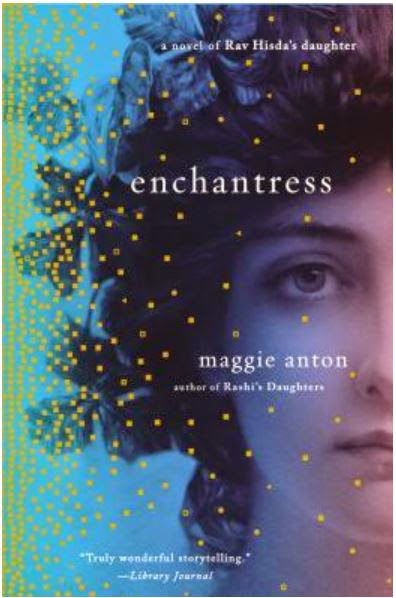 Maggie Anton's second book about the Jewish scholar and magical practitioner who she calls Hisdadukh, is far more fantasy oriented than the first volume. Demons appear and a mysterious magical artifact surfaces as Hisdadukh ascends through the hierarchy of sorceresses in the Jewish communities of ancient Persia. We learn that a number of eminent women were sorceresses and that they were as integral to the Judaism of the time as the Rabbis who also had a secret tradition of magical practices.  I had to come to the conclusion that I couldn't simply categorize this book as a historical novel.  Yes, it's certainly historical, but there's another fully developed dimension beyond the historical.

Let me explain how I slice and dice genre in this context. When an author portrays a character as casting spells in a traditional manner, this can be regarded as an accurate portrayal of ancient practice in a non-genre historical fiction book. People who don't believe that spells work can say to themselves that there is an alternate explanation for the success of those spells.    In this book a demon manifests in a public setting so that it's perceivable by a large number of people . Another demon becomes an ongoing character in the novel.  Such fantastical events aren't so amenable to a skeptical worldview.  The reader must engage in voluntary suspension of disbelief.  I would therefore shelve Enchantress as  historical fantasy next to the highly successful historical fantasy, The Golem and the Jinni  by Helene Wecker.

One way in which this novel is quite different from Wecker's is that the characters evolve over the course of the narrative.  I wish that the Golem and Jinni could have emerged from their stereotypical boxes.  Anton's protagonists, Hisdadukh and Rava, are portrayed as human beings who grow and change during their lifetimes.

As I was reading the book, I questioned the development of Hisdadukh into a woman who prioritized status and power.   Yet she still maintained the pursuit of knowledge as a main goal as well as the strength of her family and community.  Status and power were intended to serve those goals.  She didn't become distracted or corrupted by her increased status and power as some other characters did.  I found that very admirable.

Rava had a dark side to his character.  His enduring failings were arrogance and rage in response to any challenge.  Since I have little tolerance for people who refuse to admit that they can make mistakes, I originally thought that he couldn't have any successful relationships. On the other hand, I admit that he did have some commendable traits.  His brilliant mind, heroism and loyalty do go a long way to compensate for a rampant ego.   He also eventually showed some regret over the results of his own bad behavior which demonstrates growth. The revelations about the difficult past that formed his character also made him more sympathetic.

I recommend this book to readers who want to see a fully realized Jewish society where building the Talmud and practicing magic were both considered Jewish activities.

Now I would like to welcome Maggie Anton to Book Babe to ask her a few questions about the Rav Hisda's Daughter books.

You call your central character Hisdadukh, which means Hisda’s daughter in Persian.  I’m sure you’re aware that there were Jews  who thought that mentioning the name of a woman compromised her because it was considered immodest.  Could it be that Rav Hisda’s daughter had a name other than Hisda’s daughter which was never mentioned to protect her modesty?  Why did you decide that she had no other name?

My novels are about real historical figures, so I am a stickler for accuracy. For example, for a female character that has no recorded name, I won’t make one up until I research what were popular names for women in her community. I couldn’t leave Hisda’s daughter nameless – she was my heroine. But I clearly couldn’t use other female names from the Talmud because they already belonged to those women. When I learned about Babylonian Incantation Bowls, where people were inscribed with their mothers’ names, I came across a trove of Jewish females names from 4th-6th century Iraq. About a third of them were xxx-dukh, so I concluded that it was possible that the Talmud called her “Hisda’s daughter” not necessarily to protect her modesty, but because that was her name. Other women in the Talmud have names, but rather than pick one from the bowls at random, I decided to call her Hisdadukh. If I guessed wrong, who will know?


As in the first Rav Hisda’s Daughter novel, there are discussions of Talmud cases in Enchantress.  One was a rather bizarre case involving a borrowed cat.  I found it at The Talmudic Case of the Borrowed Cat which is in Baba Metziah.  Did you worry that some readers would be alienated by not wanting to read about terrible things happening to animals?

It never occurred to me that this odd story would upset my readers; nor that this was such a popular Talmudic case on the Internet. I’m a cat person myself and I liked the idea that people with rodent problems would borrow or rent a cat to deal with it. I assume that the cat died of something else and the unhappy cat’s owner wanted to hold the borrower responsible. I wanted to show that not all Talmudic arguments involved weighty religious subjects.

Astrology is part of the lives of the characters in the Rav Hisda’s Daughter books. Although my own great grandfather was  a Rabbi who consulted an astrologer, I know that many Jews would characterize those who believe in astrology as “Ovdei Kochavim” or worshipers of the stars in English.  What would you say to people who maintain that it’s unthinkable that Rabbis of the generation that created the Talmud could have consulted astrologers?

I would say that in those days, everyone consulted astrologers. In Babylonia some were knowledgeable astronomers, who not only understood the movement of heavenly bodies, but could calculate their positions in the past. The rabbis, along with other Jews, didn’t worship the stars, but rather believed that God created them and set them in motion, and that by studying their movements one could learn all sorts of things. After all, the sun affected how plants grew and the moon regulated the tides. The Talmud, in Tractate Shabbat, has a lengthy sugia about which planet rules which day and hour and how that impacts people’s actions. Each heavenly body was associated with a specific Jewish angel, whose influence ruled that day and hour.

What book are you working on next?  Can you tell us anything about it?

The story of Rav Hisda’s daughter is complete. I have no contract with Penguin for any specific work, though they have the first option on the next book I do write. Right now I’m focused on promoting Enchantress, but I admit that there is a story rattling around in my head that won’t leave. When I have time, I’ll try writing it down, but I don’t want to tempt the Evil Eye by saying more about it now ;)

Thank you, Maggie Anton, for your illuminating responses.  I will look forward to your future works. 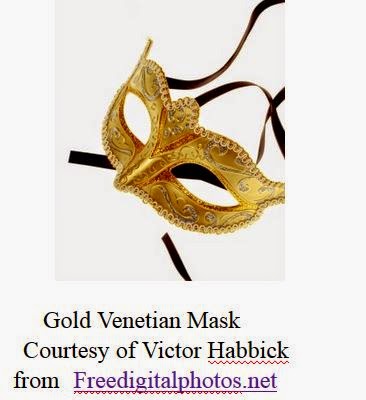 Posted by Shomeret at 9:06 AM No comments: